In a developing yet trending story from peace fm, an 80-year-old granddad is said to have married his 78-year-old “girlfriend” who has been his partner for about 25 years.

The said wedding ceremony took place in Koforidua in the Eastern region.

Following  a picture posted by peace fm’s page just few hours ago on Saturday, July 13, 2019 and probably right after the wedding. The couple are trending and gradually becoming an internet sensation as everyone keep saying “True Love” Under the said post.

The 80-year-old man by name Kwaku Gyamfi aka Odo Keteke married his wife Adwoa Asantewaa 77   at Effiduase in Koforidua in the eastern region of Ghana.

The couple is said to have been seeing each other for about 25 years now.

The woman’s first relationship ended with seven children and her bride price not being paid as the man refused taking responsibility.

The man had also been married before with four children and wanted to marry the love of his life. But an 80 year old definitely may not have the financial ability for a wedding.

Reports say they do not have any children together however their children from their previous marriages came to together to make their parents’ wish come true.

A photo from their traditional wedding was shared by peace fm.  Have a look for yourself. 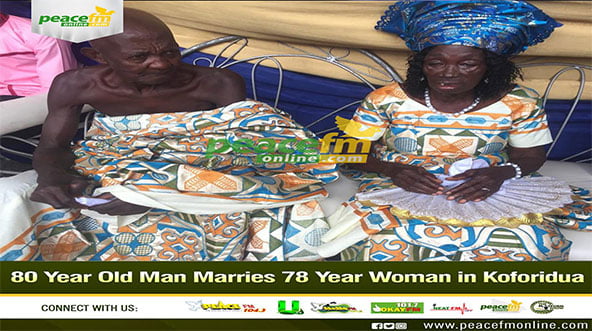