The Ghana Statistical Service has officially rescheduled the Population and Housing Census due to the COVID-19 pandemic. This was made known by Government Statistician, Professor Samuel Annim at a press conference.He further stated that the GSS will announce a new date after consulting all stakeholders.

He stated that 75,000 enumerators and supervisors are being trained through electronic means in preparation for the exercise. This was made known with the statement:

“June 28, 2020, as the Census Night has been rescheduled…We need to put together over 75,000 enumerators and supervisors and train them [for the exercise].”

The Population and Housing Census

The census was initially scheduled to begin on March 15, 2020, with the first two weeks expected to be used for listing. This process involves the zoning and coding of the number of houses and structures to be captured for the 2020 census.

However, observations from the completed field census mapping exercise necessitated the initial change in date to June 28 2020.

🔥  How GSS Population and Housing Census Will Be Conducted

The GSS had already begun recruitment of field personnel for the census before the covid-19 pandemic led to the ban on social gathering and other public activities.

State institutions such as the Electoral Commission and the National Identification Authority had equally been forced to suspend its plan to compile a new voters’ register for the December 2020 general elections and the Ghana Card registration exercise in the Eastern Region respectively.

How GSS Population and Housing Census Will Be Conducted 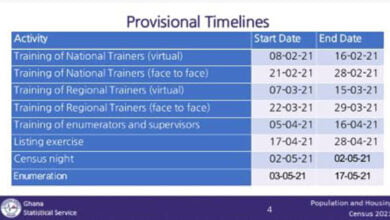