Persons close to the Burnington Music Group camp confirms that there has been trouble in camp during the recent ‘Shuga Tour’ in Europe.

This resulted in stonebwoy’s manager Blakk Cedi flying back to Ghana. Leaving stonebwoy in Europe, after the conclusion of the recent Tour.

This comes as a very big surprise considering the relationship between stonebwoy and his manager. They were almost like siblings to the extent where Blakk Cedi defended him during the brawl with fellow artist shatta wale at the Ghana Music Award.

Stonebwoys Wife Likely TO Take Over

It seems there has been trouble in paradise for some time now and stonebwoy’s wife is likely to take over his manager’s role. Not long again stonebwoy confirmed her wife is now part of his management. It is more likely his wife will take over as mangaer due to this statement made by stonebwoy before the tour.

He made this revelation to Andy Dosty on his Hitz FM interview.

The issue has to do with money and control over the record label. A development that is quite common among artists and their manager’s. The most recent being that of Fameye and Ogidi Brown.

Cause Of The Whole Issue

This whole misunderstanding has to do with kelvynbwoy. Not long after stonebwoy unfollowed kelvynbwoy on instagram and suggested  he is on ungrateful, all these problems about his manager came up.

It is confirmed that kelvynbwoy was never really signed to the Burniton Music label but rather he is signed to Blakk Arm Group a record label owned by Blakk Cedi. So apparently Blakk Cedi was managing them both. 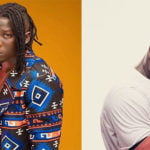 Stonebwoy  accuses kelvynboy for being ungrateful