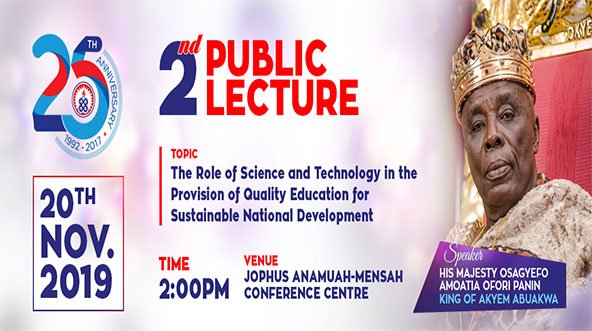 The Governing Council and Management of the University of Education, Winneba (UEW) cordially invite the general public to the second of its 25th Anniversary Public Lectures scheduled as follows:

“Sustaining Quality Education in Ghana through Effective Teacher Education: The Role of UEW”.

Topic:  The Role of Science and Technology in the Provision of Quality Education for Sustainable National Development

The King of Akyem Abuakwa, His Majesty Osagyefuo Amoatia Ofori Panin, was born on the 10th October 1952 to Nana Yaw Boakye and Odehye Abena Akoto.  He had his elementary education at Akwatia Cast Primary School (1957 – 1965), his secondary school education at Abuakwa State College (1965 – 1970) and his sixth form at College of Further Studies-Oxford (1970 – 1972).  He then proceeded to the United States of America where he attended Hartford University and pursued Political Science & Public Administration (1980 – 1982). Osagyefuo is married to Nana Asabea Ofori-Atta and they have been blessed with two children, Nana Yaw Boakye and Akoto.

On ascending the throne, Nana Amoatia Ofori Panin pledged to introduce real economic development, commercial growth and the general progress and welfare of the people.  In making this pledge, Osagyefuo referred in particular to the development of the child, health, education and environment noting that “the success of my reign is dependent totally on my ability as your leader to ensure that our future – our children – is really secure.” (Coronation speech, 11th October 1999).’

The Okyenhene has been a strong advocate for education for the youth.  Over his 20-year reign, he has on many occasions expressed concern about the low level of educational standards in the country.  Osagyefuo has demonstrated a huge commitment to Education and Child Welfare.  He has articulated his stance on child abuse and parental responsibility at a number of gatherings.  Osagyefuo has also established projects across Okyeman which include scholarships for students and teachers, library facilities, playgrounds and community centers.  He also organizes Annual Children’s Christmas parties where awards are presented to motivate and show appreciation to children.

Osagyefuo has a great interest in the proper health care of his people.  This is even more so in the prevention and care of HIV/AIDS.  Osagyefuo has set up a number of programs to educate people on the need to protect themselves and also to engender understanding and compassion for affected persons.  The programs also aim to encourage moral and social responsibility within the family and the community as a whole.  On a personal level, Osagyefuo has run in several marathons to help increase awareness of HIV/AIDS issues and has been instrumental in encouraging people to undergo voluntary tests by publicly undergoing an HIV test himself.  Osagyefuo has also set up the Okyeman AIDS Foundation to manage and coordinate work in this important area. He established the Okyeman HIV/AIDS Education Week to coincide with the World Aids Day.  In addition, on his initiative, the Ghana Society for the Blind set up The Osagyefuo Amoatia Ofori Panin Fund for the Blind.  The Fund has in its existence raised a substantial amount of funds to support the blind in the community.

Osagyefuo’s promotion and campaign to save and conserve the environment has been enormous, creating and generating awareness of environmental issues.  This has led to the establishment of the Okyeman Environment Foundation to manage environment concerns in Akyem Abuakwa.  The Foundation, in turn, has launched a number of programs to promote education and awareness in this area.  One such program is the posting of billboards all around the community emphasizing the importance of conserving rivers and other natural resources of water supply, and also conservation of our forests and refraining from burning trees.  The foundation organizes an annual Okyeman Environment Week to coincide with World Environment Day during which time Osagyefuo tours Okyeman towns to promote environmental awareness and related issues. The Community Environment Protection Brigade was also established by the Foundation to involve the community in the adoption and participation of schemes aimed at encouraging the protection of the environment.

Osagyefuo has not only served the people of Okyeman but Ghana at large; he has served as the Chairman of the Environmental Protection Agency (EPA), the Forest Plantation Development Fund Board and the Ghana Society for the Blind. 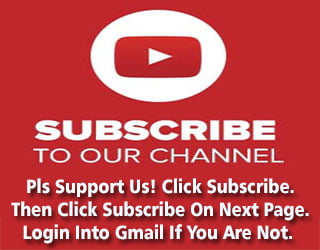